Review of 80's Romance, The Complete Collection Album by The Belle Stars

With the current surge in eighties influences across music and fashion, it's hardly a surprise that so many acts of the decade are trying to use this to their advantage. The Belle Stars are no exception to this. 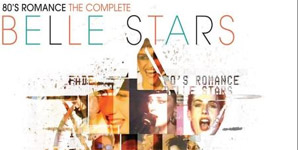 When you think girl bands you automatically jump to Girls Aloud, The Saturdays, or heaven forbid Spice Girls, but in reality girl bands weren't always about manufactured tackiness. The Belle Stars were part of the original post punk, strong woman movement.

The Belle Stars created strong and individual tracks, and as seen women from two different bands, and various adoptions along the way, their influences were always going to be varied. They have that happy beat going on that literally forces you to get involved.

Never having a number one (or even close really), this album still contains all eleven released singles. Unless you were a real fan, the whole collection may be a little too much and you generally end up skipping to the more well known tracks. 'Sign Of The Times', 'Needle In Haystack, and 'The Clapping Song' are all highlights. The admirable point is that although we know tracks like these primarily from other artists, they do receive a real Belle Stars make over. Obviously a positive spin for the group, but this also has its downside.

Listening to The Belle Stars over and over is quick succession brings up the point that they may be a one trick pony. Tracks are very similar, and of course they have that distinctive style applied to everything. Take for example how much 'Sign Of The Times' sounds like 'Baby I'm Yours'.

'Iko Iko' being their biggest US hit still stands out within this collection as their strongest track. Used within films such as 'Rainman', and 'The Hangover', it has continued to be one of their most iconic pieces. I defy you not to have your spirits lifted by this one!

Essentially they are what they are. This is a collection of their work, nothing new or trying to reinvent themselves. It's fun, upbeat, and packs an attitude. If you were a fan then you'll love it, and if you're an Ellie Goulding or Eliza Doolittle type then give them a try. It's a lot of fun.