By Hannah Spencer in Music Reviews on 30 November 2010

Hyped on their MySpace as 'Indian-influenced electro-acoustic alternative rock', from The Beautiful Losers one anticipates a kind of exciting fusion of folk and world music meeting alternative rock; despite starting with a strong cohort of diverse tracks, however, Four Corners Of A Tiny Planet soon blurs into a rather disappointing and samey effort.

Immediately unveiling The Beautiful Losers' world fusion intentions, Four Corners Of A Tiny Planet opens with a rhythmic Indian percussion introduction provided by the All India Radio Ensemble, punctuated by the low boom of the ghutam. Except for its' interlocking guitar parts and occasional vocal outbursts, 'Peaceful Buddhist Warrior' is a predominantly percussion-led track that serves almost as a tribal opening to the album, later fading out to a solo Indian stringed instrument. In the following track, The Beautiful Losers evidence their contrasting, typically western alternative rock blend and Goo Goo Dolls type feel blending strummed acoustic with picked electric guitars and the usual drums, bass and synth suspects. It's a simple song with four chord progression throughout, but demonstrates the influence of iconic rock bands such as U2, The Beatles and Led Zeppelin. 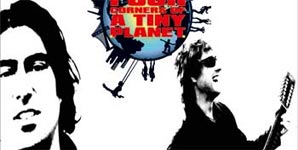