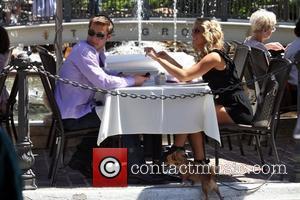 the bachelor season fifteen is now well under way and Brad Womack has already let it slip that he did propose to the eventual winner.
THE BACHELOR season fifteen, which was filmed several months ago, will see BRAD WOMACK propose to the eventual winner and it has been reported that he purchased the most expensive engagement ring in the show's history, according to Life & Style Weekly.The show's producers have traditionally had the job of picking out an engagement ring for the happy couple, but 37-year-old Womack insisted on choosing his own. He personally selected a 3-carat ring from jeweller to the stars Neil Lane. An insider on the show said, "It's worth $90,000. The stone is a round diamond with a pave eternity band. The setting is in platinum. The whole piece is just spectacular". Although the show's finale was filmed several months ago, the identity of this season's bride-to-be has been kept safely under wraps. CHANTAL O BRIEN is currently the favourite to become Womack's wife but the insider added, "Whoever is getting that ring is a lucky, lucky girl!"
On last night's episode (21st January 2011) of THE BACHELOR, Womack eliminated SHAWNTEL NEWTON to narrow down his search for a wife to just three women.