Review of Chapter II EP by The Audition

'Chapter 2' literally marks a new chapter for The Audition. The bassist left and rejoined and then they said goodbye to their guitarist, in the wake of their parting with Victory Records. Four albums on the label is impressive but after their last 'Great Danger' it was obvious that the Chicago pop-punksters were just churning out tracks with the same old formula over and over. But this brimming sea of rock glory was not taking them anywhere of a high significance. So they jumped the Victory ship and asked fans and the kind hearted to pledge their hard-earned cash for this 6-track EP to be created. 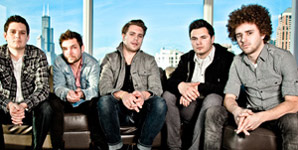 The pledge people will be happy with this outcome simply because they will love this band no matter what it sounds/looks/smells like. Though the average non-obsessive (non-adolescent) will be able to step back and see this as an awkward bridge between being under the comfortable wing of a label and having as much musical freedom as possible. It just doesn't have that function of hooking you in. Unlike their 2008 album, 'Champion' which is arguably their best work, even the Billboard charts agreed with this one also.

'Chapter 2' isn't bad. If this was their first ever EP, everyone would be raving about the excellent power in Danny Stevens' vocal, which to be honest does divide the band away from other groups of the same so-called 'genre'. His strength gives the band a voice that sort of makes up for the lack of originality in some cases. 'Evil' is a track more aligned with their older-selves, the broken syllables have been devised to absorb some individuality into the EP, something which the five-piece should definitely expand upon. The high-pitched scream will also grab your attention if you got bored during the first two songs.

The last two songs also stir a little swirl of excitement. 'You Gotta Believe' features a killer riff and despite the title and words being a little 'One Direction' they fit the speedy backing. The solid beat of 'Talkin' is the only aspect that divides it from the dark side of the unoriginality that lingers over the majority of tracks.

If this really is 'Chapter 2' and you forget about the band's past releases and dramas, you'll be made aware of how much potential this has. But that's a difficult task, erasing the combined power of roughly 40 tracks from your memory. If The Audition really want to smash this independent lark, they've got to tune in to their imagination and bring back the 'unique' to their name.