Incarcerated Director Randall Miller Is Convinced His Guilty Plea For Involuntary Manslaughter And Criminal Trespass Relating To The Death Of Camera Assistant Sarah Jones Will Be Set Aside After Maintaining His Innocence In A Letter To Insurance Bosses Behind The Stalled Allman Brothers' Biopic. 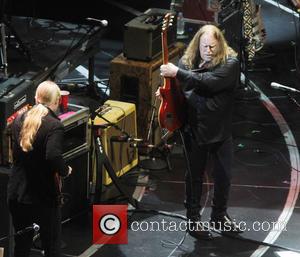 The filmmaker initially denied the counts following the fatal accident on the Georgia set of Midnight Rider last year (14), when Jones, 27, was hit and killed by a train while shooting footage on railroad tracks in Wayne County.

He was due to stand trial in March (15), but reached a deal with prosecutors days earlier, agreeing to admit to the crimes and serve two years behind bars in exchange for similar charges to be dropped against his wife, producer Jody Savin.

However, the director claims he is completely innocent and, according to a letter filed in court on Monday (04May15) as part of an amended lawsuit by producers at Film Allman against insurance firms New York Marine and General Insurance Company, he will have his record wiped clean once he completes his sentence.

Attorney Mary Craig Calkins writes, "Mr. Miller entered a guilty plea to save his wife, Ms. Savin, from criminal liability and to ensure that she could remain with their children in California. Mr. Miller contends that he is innocent, and disputes his guilt in this matter. Both Mr. Miller and his counsel, Ed Garland, contested some of the factual findings read into the record by the prosecutor, and Mr. Miller anticipates... that his plea will be set aside."

Executives at Film Allman accuse bosses at the insurance companies of forcing them into a $5 million (£3.1 million) settlement with Jones' parents by failing to consult producers about the payment beforehand and then revealing that the money exhausted the limits on their policies, leaving them without coverage and with no choice but to shut down the project.

Film Allman chiefs also blast insurers by suggesting they failed to provide Miller and Savin with "an adequate defense" for their legal woes.