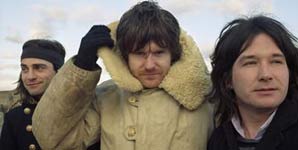 With the overwhelming critical acclaim for their debut album Astronomy For Dogs still ringing in their ears, The Aliens announce the release of single 'Robot Man' out on 25th June.

'Robot Man' is a piece of funk-fried disco-rock genius, and in less than four minutes it manages to encompass half-a-dozen different genres as well as shoehorning in the all important piano break down and guitar solos. This is the unlikely acid-tinged sound of Sly Stone meeting David Elsewhere, and as for the lyrics they came from an epiphany at a bus stop, according to Anderson 'I was just standing at somebody's door and it just came out. I just started singing it', a good as place as any to realise a magnum opus.

The Aliens, as if you didn't know, are Gordon Anderson (vocals / guitar), John Maclean (keyboards / electronics) and Robin Jones (drums). In their previous incarnation The Beta Band, John & Robin offered a much needed alternative to the self-satisfied sounds of Brit-Pop when they emerged in the mid-nineties. Today as The Aliens, along with old pal Gordon Anderson, they stand out amongst the crowd of unimaginative indie-rock bands that dominate the musical landscape. 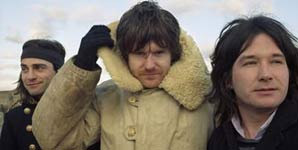 The Aliens - The Faversham, Leeds 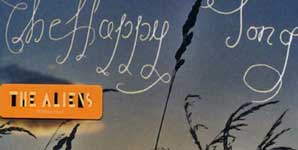 The Aliens - The Happy Song