The 1975 Frontman Matt Healy Has Opened Up About A Major Meltdown He Suffered During One Of The Band's U.s. Gigs After Battling A Series Of Personal Problems. 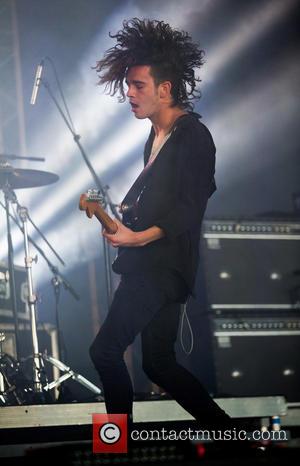 The British rockers found success in 2013 with their self titled debut album, but Matt struggled to deal with fame and the band's popularity with young female fans.

The musician admits he was dealing with "girl stuff", as well as financial problems and drug-related issues, and his troubles came to a head at a concert in Boston, Massachusetts in December (14) when Matt broke down on stage.

"There was girl stuff. There was family stuff. There was financial stuff. There was drug stuff," the rocker tells British newspaper The Guardian. "I remember hearing the crowd and having an identity crisis. I thought: 'If you want to see a show, I'll give you a f**king show. If you've come to see the jester drink himself into a slumber, I'll give it to you.' I felt like I'd become an idea as opposed to being a person."

Matt admits he launched into an angry rant at a young woman who shouted "I love you" to him during the show.

"Jesus. Can you imagine your favourite band shouting that at you? What a d**khead. What a horrible thing to say to a kid who f**king does love me."

The Chocolate singer felt so disorientated that the band's drummer, George Daniel, had to carry him off stage at the end of the show: "George carried me off, 'cos I would have stayed there, apparently. I just wanted to sit there and do something you don't. It was so blurry and of such a particular colour: I remember everything as orangey yellow."

Shortly before Matt's meltdown, the group was thrust further into the spotlight amid rumours of a romance between the singer and Taylor Swift, and the frontman admits he "fell for" the pop star.

However, he was baffled by the showbusiness circles she moved in and felt "freaked out" when he was publicly linked to the Love Story beauty.

"The things that surround her are like Barack Obama," he explains. "I fell for her a little bit, but everyone falls for Taylor Swift... The day after she'd been to a show of ours, someone sent me a screenshot of E! News with the headline 'Who is Matt Healy?' That freaked me out. I'm not ready to indulge in that world and I'm not ready to be judged by that world."