The 1975 Land First Ever Billboard Number One With 'I Like It When You Sleep...'

They also knock Adele off the top of UK charts.

The 1975 rock their way to the number one in the Billboard 200 Chart with their long-awaited second album 'I Like It When You Sleep, For You Are So Beautiful Yet So Unaware Of It'. The album has also given them another number one in the UK, taking Adele's place. 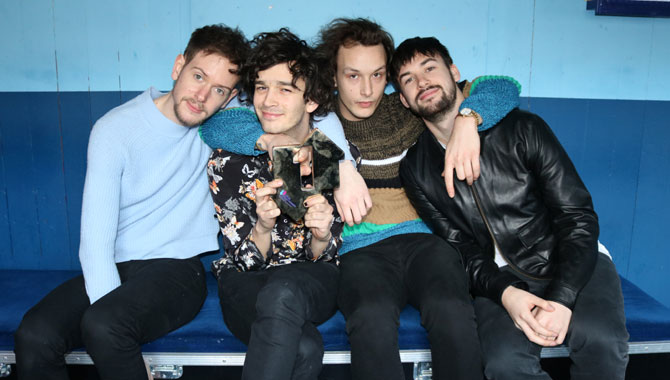 So the Manchester four-piece haven't made themselves the most likeable of bands; quite the opposite. They've been openly critical about their fellow musicians, not to mention openly criticized for their shameless arrogance, but it turns out they were right to be cocky if the release of 'I Like It When You Sleep...' is anything to go by.

Their latest effort has served as their first US chart-topper having sold 98,000 in the first week. It has also superceded Adele's '25' with 58,000 copies sold, which is about 6,500 more than Adele. Recorded between February and November 2015 at Ravenscourt Studio in London and The Ranch in Woodland Hills, California, 'I Like It When You Sleep...' has had an air of mystery about it since writing first got underway. The band teased fans with cryptic Tweets and deactivated social media accounts, causing followers to speculate that they had broken up or taken a hiatus. Soon though, the plans behind their sophomore album were unveiled, and so far they've released five singles from it including 'Love Me' and 'The Sound'.

More: The 1975 trick fans into thinking they've broken up

Frontman Matthew Healy and drummer George Daniel co-produced the album alongside Mike Crossey, who also produced their 2013 self-titled debut album featuring 'Sex' and 'Girls'. Crossey has recently worked alongside the likes of The Gaslight Anthem, Twenty One Pilots and Wolf Alice. The album was released on February 26th 2016, with a special edition distributed solely from Target featuring bonus tracks 'A Change of Heart' and 'How to Draw'.

Music critics have been raving about the record since its release, with NME confessing: 'Any record that burrows as deep into your psyche as 'I Like It...' should be considered essential. It's hugely clever and wryly funny, too.' Meanwhile, Rolling Stone called the band an 'enjoyable balance of desire and distraction', and Spin approved of their image, asking its readers: 'When was the last time that rock music with such a commanding voice had this much fashion sense?'

The 1975 are currently on their world tour, doing the rounds in the UK with multiple sold-out shows at London's O2 Academy Brixton, Manchester's O2 Apollo and Glasgow's O2 Academy. Then they'll hit the rest of Europe, before jetting off to California for Coachella followed by a number of other US dates.