Unable to avoid judging a book by its cover syndrome, even reading their name and looking at the album sleeve there's a blatant suspicion that Terror Pigeon Dance Revolt's debut album may be a crazy mixture of psychedelic, experimental weirdness. Once the tracklisting is deciphered through hectic and uncomfortable multicoloured artwork, more clues are found in track titles 'Iotdwkirthbr', whatever that means, and 'In Your Face Sickness'. In listening to I Love You I Love You I Love You & I'm In Love With You! Have An Awesome Day!, however, these suspicions are proven entirely correct.

Opener 'Snakebites' has an air of Arcade Fire meets Flaming Lips crossed with the nasal, heavily American accented vocals of Blink 182's Tom DeLonge; immediately a weird blend. Throughout the track, driving military snare punctures through the synth and guitar bed over which group vocals meander. Already suggesting simple harmonies and rambling songwriting presented through mob-rampages such as 'Grouphug', I Love You I Love You I Love You & I'm In Love With You! Have An Awesome Day! is proven as not exactly easy and comfortable listening. 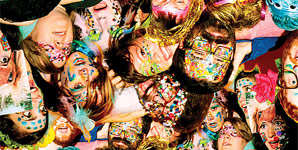 'Tokyo Drift' suggests Terror Pigeon Dance Revolt as something of a lo-fi indie equivalent to rap, with speak-singing and sing-shouting which eventually meanders into a weak sung vocal over synths, melodica and percussion. On most tracks, the lyrics of group vocals are essentially repeated phrases; fragments of their songs ingrain themselves, but this is more a result of irritating repetition of phrases rather than good songwriting and strong, catchy melodies.

From the Zutons-esque noodling raucous saxophone of 'Iotdwykirthbr', 'My Favourite Hair' and throughout the album, to the Early Learning Centre-like keyboard introduction to 'Snowday', right through to the eclectic conclusion, 'Ride Friendship', Terror Pigeon Dance Revolt have absolutely no reluctance to incorporate new and strange sounds into their rambling blend and in that sense have the musical courage of the likes of Guillemots. The album's conclusion is undoubtedly its' most listenable track, constructed with the same repeated lyric formula but over a better well-worked musical background with better consideration of harmony. Incorporating synths, strings, flutes, sax and trumpets in an eclectic instrumental blend under the vocals, 'Ride Friendship' appropriately brings the album to a close with a rough sounding musical menagerie.

Through their inebriated, self-obsessed group fusion, Terror Pigeon Dance Revolt combine the togetherness vibe of the Polyphonic Spree with the immature mob-like sense of Reel Big Fish, especially with the swear word-ridden 'In Your Face Sickness'. It's a strange blend, one that's probably better appreciated either live, drunk or both; can't fault them on experimental confidence though...