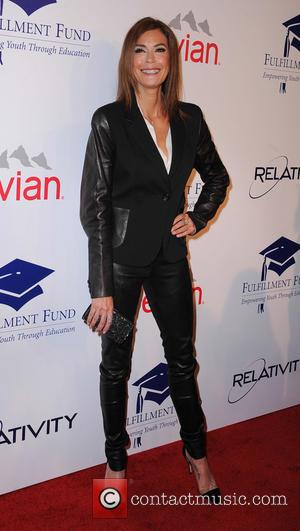 Actress Teri Hatcher and tennis star Caroline Wozniacki laced up their sneakers on Sunday (02Nov14) as they hit the pavement to take part in the New York City Marathon.

The Desperate Housewives star befriended Wozniacki and reality Tv chef Richard Blais before the big race as they huddled together to keep away the cold, and the actress shared a photo of the trio with fans on her Twitter.com page.

Hatcher embarked on a leisurely pace once the race started and even stopped for photos along the way with friends and her daughter Emerson, who had turned out to cheer her mum on, while Wozniacki hit the ground running and kept up a good pace throughout the city's five boroughs, completing the 26-mile (41.8 kilometre) feat in three hours, 26 minutes and 33 seconds.

The sportswoman was congratulated at the finish line by her close pal and fellow tennis ace, Serena Williams, who tweeted, "Is it normal to cry when someone finished marathon (sic)? So proud of you caro @CaroWozniacki nycmarathon".

Meanwhile, Twilight actor Peter Facinelli voiced his support for his sister, who was among the more than 50,000 runners who braved the chilly temperatures and strong winds to compete.

Taking to Twitter, he wrote, "Give some cheers 2 my sis @NikoSophiaMom who is running the #nycmarathon. She has about 8 more miles to go. I'm eating a donut in support."

He later added, "Awesome job @NikoSophiaMom She finished in 4 hours 26 min. Who (can) run for that long? Your (sic) an inspiration. Thanks to all for cheering her on."

The 2014 New York City Marathon was won by Kenyan runners Wilson Kipsang and Mary Keitany, who triumphed in the men's and women's races, respectively.