Post-Apocalypto will be trailed by a six-part animated series, which will air on Tenacious D’s YouTube channel. Hand-drawn by Black and featuring the voices of himself and Gass, it will start later this month on September 28th, with a new episode available every Friday until the album’s release. 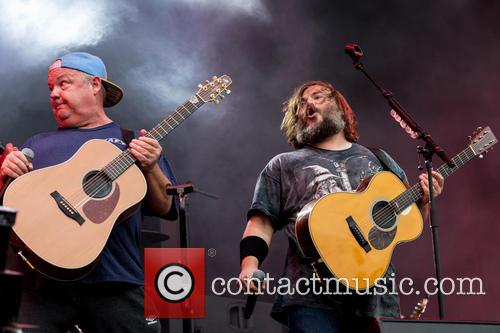 Having fired Lindsey Buckingham back in April this year, the Mac hired two more musicians in his place, with guitarists Mike Campbell – ex of Tom Petty & The Heartbreakers – and Crowded House’s Neil Finn. The new line-up performed two songs, ‘The Chain’ and ‘Gypsy’, ahead of next month’s 52-date North American tour.

Mark Ronson and Diplo teamed up with Dua Lipa to reveal the fourth single to be released from the duo’s current Silk City project, a ‘90s house-influenced cut titled ‘Electricity’. It comes around a month after the outfit made its live debut at Bestival.

Radiohead frontman Thom Yorke has announced a number of listening parties for his new score to Luca Guadagnino’s remake of the horror film Suspiria.

Events in London, New York, Paris, Sao Paulo, Amsterdam, Milan, Madrid, Mexico City, and Tokyo will take place next Wednesday, Thursday, and Friday (September 12th-14th). The album itself is out on October 26th.

Metallica have announce the latest of their 30th anniversary album box sets, this time for their 1988 commercial breakthrough …And Justice For All. The ‘definitive’ remastered re-issue will be available on November 2nd, and is available in an array different formats, from digital and cassette to CD and vinyl.

If you were on Twitter while also enjoying the World Cup earlier this summer, you may have noticed a brilliant account titled ‘Bands F.C.’ launched around the same time. Set up by a graphic designer, it melds band names with logos of football clubs, and its sensibility of music and sport fandom has caught the imagination of tens of thousands of fans.

This Friday (September 7th), it launched an official website to cater for massive demand for merchandise from fans. It was experiencing teething problems as of Friday lunchtime because of huge traffic, but keep your eyes on bandsfc.com!

More: Ranking all the Mercury Prize winning albums, from worst to best