The 1989 Muay Thai action movie Kickboxer starred a young Jean-Claude Van Damme, who pops up in this rather cheesy remake in the old mentor role. Designed as the launch of a new franchise for martial artist Alain Moussi, this movie just about gets away with being a guilty pleasure romp. Although the predictability of the plot and the corny dialogue make it sometimes feel like a spoof. 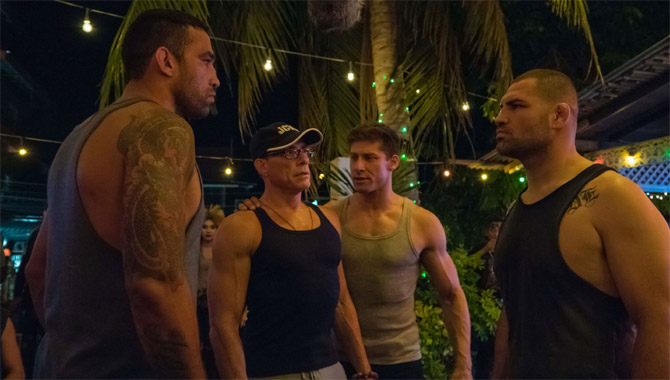 Moussi plays Kurt, a fit young guy who travels to Thailand after his big brother Eric (Darren Shahlayi) is killed while fighting the thuggish master Tong Po (David Bautista). Posing as a seeker, he enters Tong Po's training temple and challenges the master to a duo. But of course he's not ready yet. With the help of the very hot young cop Liu (Sara Malakul Lane), who feels guilty because the police neglected to investigate Eric's death, Kurt tracks down Eric's trainer Durand (Van Damme). But can he improve his skills in time for the big showdown? And what is underground fight organiser Marcia (Gina Carano) up to?

The screenwriters assemble this story by numbers, adding in a number of real-life mixed martial-arts champions (their underwritten roles seem added in to distract fans from the simple plot). Director John Stockwell shoots and edits the film like a cheap B-movie, although the exotic locations look terrific. And of course there's a major fight about every five minutes, each with its own specific gimmick (like an instant rainstorm or two handy elephants to climb on). Even so, the fight choreography feels somewhat cursory, more flashy than brutal. But the real problem is that most of the fighters simply aren't up to the acting challenge. Moussi has a charismatic presence and a lithe, muscly physicality, but his scenes only work when he's punching or kicking someone's lights out. Even his interaction with an unusually relaxed Van Damme only works when they're physically sparring.