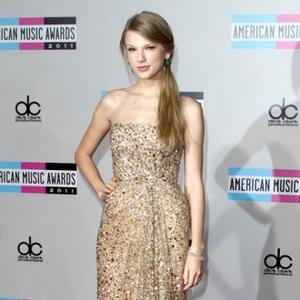 The 'Love Story' hitmaker - who was named Entertainer of The Year at the Country Music Awards earlier this month - won the major Artist of the Year prize, as well as Best Female Artist and Best Album for 'Speak Now' in the Country Music category at the ceremony at the Nokia Theatre in Los Angeles.

The 21-year-old beauty thanked her fans and friend Selena Gomez and told the crowd the achievement was "one of the most amazing things that has ever happened to me".

Adele also picked up a hat-trick of gongs for Favourite Female Artist and Favourite Album for '21' in the Pop or Rock Music category, as well as Favourite Artist in the Adult Contemporary Music group.

Nicki Minaj - who opened the show with a performance of her hit song 'Super Bass' - took home Favourite Artist and Favourite Album for 'Pink Friday' in the Rap/Hip-Hop music section, and Katy Perry won a special award for being the first female pop artist to have five number one singles from one album.

The brunette beauty - who achieved the feat with her 'Teenage Dream' record - thanked her fans for appreciating the variation in her songs.

She said: "Thanks for letting me be a chameleon this year."

Kelly Clarkson, Chris Brown and will.i.am, Mary J. Blige, David Guetta, Pitbull and Maroon 5 were among the performers on the night, which also saw Justin Bieber also take to the stage to perform 'Mistletoe' from his Christmas album 'Under The Mistletoe' - but he left the ceremony empty handed.