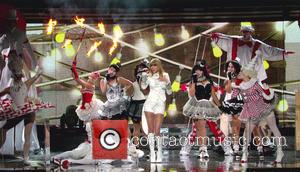 Taylor Swift is facing a $1.8 million lawsuit, after she walked away in profit from a country music hoedown in Canada… one which never happened. TMZ have obtained a copy of the lawsuit, relating to the Capital Hoedown, which was supposed to take place in Ottawa, in August 2012 but got cancelled, because – according to TMZ – the promoters “couldn’t get their act together.”

Swift, however, had already been paid her $2.5 million upfront. The ticket company – who shelled out $1.8 million in refunded ticket sales – reckon that Swift should foot the bill, seeing as she didn’t actually have to perform but still ended up with the cash. Even if Swift did cough up $1.8 million, she would still have walked away with $700,000 profit – not a bad wage for not going to work, we reckon! Taylor won’t be signing that cheque just yet though as her rep has explained to TMZ that Taylor never had any kind of contract with the ticketing agency. In fact, she hasn’t even seen the lawsuit yet, so it would be very surprising if she willingly handed over the best part of $2 million if she’s not breached any contract.

Meanwhile, Taylor is scheduled to perform at the Brits tonight (February 19, 2013), making it quite likely that she’ll bump into her ex, Harry Styles of One Direction. Whether or not she’ll make a dig at him onstage, as she appeared to at the Grammys remains to be seen.

Watch the video for Taylor Swift's 'I Knew You Were Trouble'