Taylor Swift is set to bring her new boyfriend Conor Kennedy to the MTV Video Music Awards in Los Angeles next week. 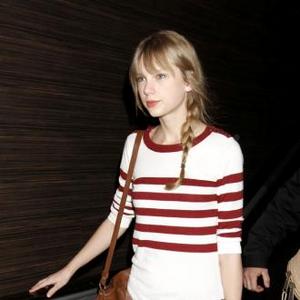 The 'Love Story' singer will debut a new song from her upcoming fourth studio album 'Red' at the ceremony, which takes place at Los Angeles' Staples Center on September 6 ,and sources close to the star say she is planning to bring her new boyfriend along for moral support.

A source told HollywoodLife.com: ''Conor probably won't walk the red carpet, but he'll be there to support her performance at the show!''

The couple are also planning to spend time with Conor's cousin Patrick Schwarzenegger, who is attending the University of Southern California (USC) in Los Angeles.

The source added: ''They will probably hang out with Patrick while they are out in LA. Since Patrick will be in town as he just started classes at USC, they all want to party together.''

Taylor, 22 and 18-year-old Conor have only been dating since June but friends of the couple say things have gotten so serious they could be planning to elope after the singer sent a plane to fly him to her home in Nashville, Tennessee, because she missed him so much.

A source said: ''Taylor missed Conor so much, she sent a plane for him a few days later. He's been with her ever since, and his family doesn't know when he will be back.

''Things have become so serious between them so fast that no one in the Kennedy family compound at Hyannis Port would be surprised if they eloped.

''They are inseparable and are all over each other all the time.''