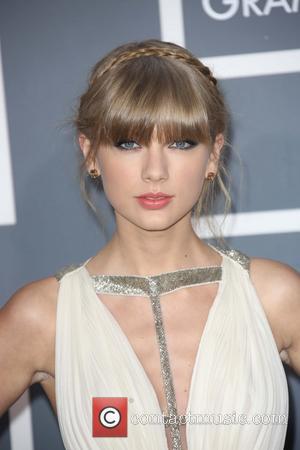 Taylor Swift will be going dark for the Brit Awards in London next week (20Feb13) after wowing fans with her all-white circus stage set at the Grammy Awards on Sunday (10Feb13).

Costume designer Marina Toybina, who created the singer's look for the Grammys, started work on costumes for the Love Story star's showstopping Brits spectacular on Monday (11Feb13) and reveals the London look will be the "yin to the yang" of the singer's most recent awards style.

She tells Wenn, "Taylor will be going much darker for the Brits - there will be a lot of black. It will be like a part two to what we did for the Grammys... but that's not to say we'll be creating another circus onstage. It will look different."

And Toybina reveals both Grammys circus ringleader and black widow looks will be incorporated into shows on Swift's upcoming tour, which begins next month (Mar13).

She adds, "Her album is called Red and so fans can expect a lot of white, red and black onstage."

Meanwhile, the designer reveals it took her and 15 stylists, sewers and dressmakers 10 days to create the costumes for Swift's Grammys stageshow.

She says, "It was exhausting. We didn't get much sleep for a week and a half. But it was all worth it when we saw the end result and the look on Taylor's face made all the effort worthwhile. She was so excited."

Swift took the stage with her band, 14 dancers and seven speciality circus acts to open the Grammy Awards in Los Angeles.