It's a record-breaking haul for Swift, as she was nominated in every possible category she could have been.

Just a fortnight after trouncing the opposition at the VMAs, Taylor Swift looks set for another strong performance at MTV’s Europe Music Awards. She’s up for a record-breaking total of nine trophies in the EMA nominations, which were announced on Tuesday (September 15th) via MTV’s Snapchat Discover channel.

‘Bad Blood’, the fourth single from 1989 which also features Kendrick Lamar, is the centre of attention, nominated in three categories (Best Song, Best Video and the newly-created prize for Best Collaboration). Furthermore, Swift was nominated in every possible category that she could have been – Best Pop Act, Best Live Act, Best Female, Biggest Fans and Best Look. 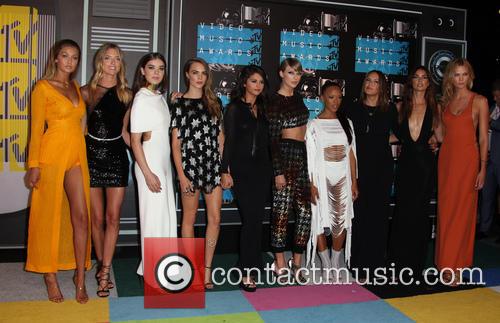 Taylor Swift at the MTV VMAs in August, with her "squad" of celebrity pals

Justin Bieber follows with the next highest total of nominations, and will be up against Swift in three of those (Best Pop, Biggest Fans and Best Look). The sometimes controversial singer showcased his new single ‘What Do You Mean?’ at the VMAs a couple of weeks ago, and received a rapturous reception after his performance that brought him to tears.

Meanwhile, it’s a pretty good field for British talent, with the all-conquering Ed Sheeran receiving a total of three nominations. Having enjoyed a stellar year, shifting more than 10 million copies of his second album X, he’s included in the shortlists for Best Male, Best Live Act and Best World Stage.

One Direction and Ellie Goulding follow with two nominations each, while Charli XCX, Jessie Ware, Rita Ora, Mark Ronson, Dizzee Rascal and Jess Glynne all received one nod each.

Arch-nemeses Miley Cyrus and Nicki Minaj are both nominated for Best Female (alongside Swift), meaning that we might see a continuation of their unedifying but highly entertaining hostilities from two weeks ago at the VMAs.

After accepting her award for Best Hip-Hop Video, Minaj said about host Cyrus: “And now back to this b**** that had a lot to say to me in the press. What's good?” Former Disney star Miley tried her best to remain cool but was clearly fuming, responding with “We are all in this industry, we all do interviews and we all know how they manipulate s***. Nicki congratulations.”

The MTV EMAs 2015 are held on Sunday October 25th, and this year is taking place at the Mediolanum Forum in Milan.