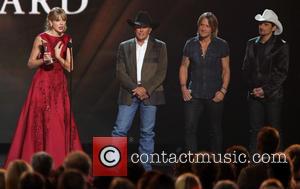 Taylor Swift is helping fans deal with their personal problems by inviting them to discuss their issues with her at special group therapy sessions after her concerts.

The Love Story hitmaker, who was bullied when she was at school in Pennsylvania, has been picking concert-goers at random during her Red World Tour and bringing them backstage so they can discuss their worries with her.

Swift hopes the scheme will help bullied fans, telling Britain's Top of the Pops magazine, "After the show we pick fans randomly and they're brought backstage into this amazing tent called Club Red. I go in with about 35 to 40 fans and hear what's going on in their lives.

"Whether someone's picking on them at school or if someone had a party and invited every single girl in the class but them. It happened to me, and that's why as an artist, you should try and help people one-on-one.''