Taylor Swift dived into the crowd during her performance of 'We Are Never Ever Getting Back Together', which closed the MTV Video Music Awards (VMAs) last night (06.09.12). 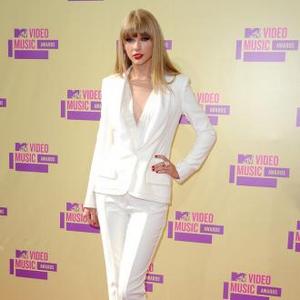 Taylor Swift dived into the crowd during her performance at the MTV Video Music Awards (VMAs).

The 22-year-old singer closed the ceremony last night (06.09.12) with a performance of her new single 'We Are Never Getting Back Together', for which she was joined by a troupe of dancers in brightly-coloured casual outfits and sunglasses.

Taylor - who arrived at the ceremony in a white tuxedo but switched to a red and white striped T-shirt, tiny denim shorts and red brogues for her performance - began by singing into a mock studio before stepping out onto the stage for a high energy routine, which she finished with her leap into the audience.

The blonde beauty enjoyed her evening at the awards - particularly the Hospitality.

The 'Love Story' hitmaker had earlier admitted she was nervous about the performance.

She said: ''You get really nervous. It's a mixture of all these emotions of excitement of nerves of planning, of making sure that you have enough rehearsal time, know all your blocking ... because the thing about the VMAs is, the people that help put together the performances are honestly some of the best people you have ever worked with and they put together these huge, vast, massively entertaining performances.''

Taylor wasn't the only star to wow the crowd at Los Angeles' Staples Center with a dazzling performance.

Pink took to a flying trapeze to sing 'Blow Me (One Last Kiss)', while triple-award winners One Direction ascended from beneath the stage to perform 'One Thing' on a raised platform.

In contrast, Frank Ocean gave a stripped-down rendition of 'Thinking Of You', accompanied only by a guitarist.