Justin Bieber had a night to remember at Sunday's Billboard Music Awards, for some good reasons and for some pretty bad reasons too.

Taylor Swift's disgusted reaction to the reunion between Justin Bieber and Selena Gomez backstage at the Billboard Music Awards is proof that this years instalment of the annual event is the gift that keeps on giving. A clip of Taylor and Selena walking into a backstage area where Justin is already waiting at the awards gala features a 'blink and you'll miss it moment' where the country-pop star shows her true feelings towards the Canadian pop sensation and his on-again-off-again relationship with Gomez. Turns out she has the same response as just about anyone else would.

The clip is from a backstage stream from Sunday's (May 19) awards show, and features Bieber stood in a room waiting with his entourage when Gomez and Swift walk into the room. Taylor tries her hardest to walk straight past offering an nod of acknowledgement to Bieber, however when Selena follows her in she obviously can't just blank her ex-boyfriend, and the two go in for a quick kiss on the cheek. Swift can then be see turning away in disgust and sticking her tongue out in disgust. The hilarious reaction shows up at around the 1 minute mark in the video.

That wasn't it in terms of unscripted hilarity at the awards show though, as R&B star Miguel ended up giving two audience members a night they won't soon forget. The 'Adorn' singer tried leaping over a small section of the audience during his performance but miscalculated his jump and landed on two female patrons. Kid Rock was also on hand to get a little mouth before presenting out an awarding, asking the audience for a "shout out to all the artists lip syncing over pre-recorded music."

Perhaps the best part of the show was again featuring Justin, but this time the was on stage and in full view. After picking up his third award of the night, Justin addressed his recent and well-publicised tomfoolery, pleading with the audience that he be taken seriously as an artist now. The response form the audience; a hefty round of boos. Watch the cold-shoulder below (skip to the end). 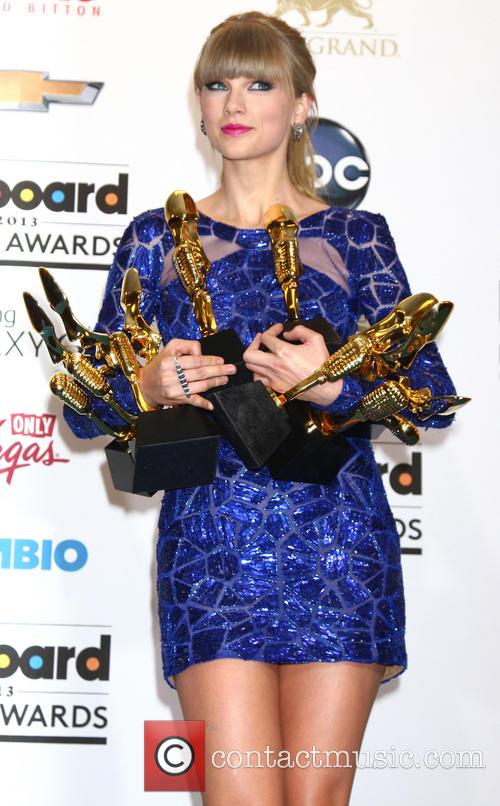 Swift barely able to hold all of her awards