Taylor Swift and Calvin Harris confirmed their relationship by kissing at the Billboard Music Awards (17.05.15). 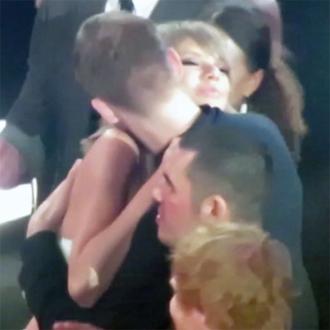 Taylor Swift and Calvin Harris have seemingly confirmed their relationship by kissing at the Billboard Music Awards (17.05.15).

The 'Blank Space' singer was spotted sitting in the front row next to the 31-year-old DJ at the star-studded event in Las Vegas, where the couple shared numerous romantic gestures.

As well as Calvin keeping one arm tucked behind the blonde beauty, the 'Summer' hitmaker gave Taylor a congratulatory smooch when she was announced as the winner of the coveted Top 200 Album award for her fifth studio album, '1989'.

The kiss wasn't the only time the pair were seen getting close and personal during the ceremony, as they celebrated the slew of nine awards they won between them with other displays of affection, including Calvin wrapping his arms around the 25-year-old star.

Taylor - who wore a low-cut, white, Balmain jumpsuit to the event at the MGM Grand Garden Arena - is rumoured to have started their relationship after meeting the hunk at a BRIT Awards after party in London in February, and were recently seen enjoying an intimate date in Los Angeles.

And although the 'Bad Blood' singer is set to have a busy few months as she tours the US, a source recently revealed she has factored time into her hectic schedule to see her handsome beau.

The insider said: ''Their relationship isn't conveniently timed. She has gaps in her schedule, so she'll see him.''