Cara, Gigi, Karlie and Kendall all strutted their stuff during the singer’s sold out Hyde Park show.

Taylor Swift put the UK leg of her mammoth 1989 tour to rest on Saturday evening, with a sold out open air show at London’s Hyde Park. During the show Swift showcased tracks from her most recent release 1989, while still treating fans to re-workings of classic tracks such as ‘We Are Never Ever Getting Back Together’ and ‘Love Story’. 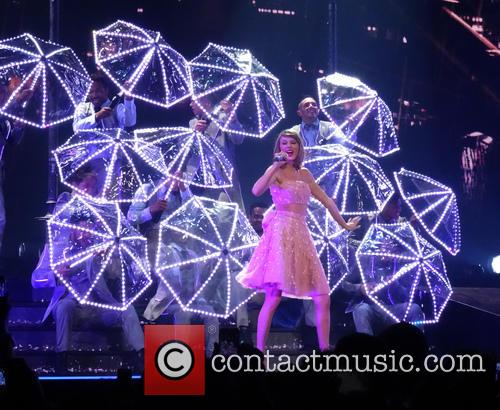 Swift arrived on stage 15 minutes early, opening with ‘Welcome to New York’, before going in to ‘New Romantics’ and then smash hit, ‘Blank Space’ all from 1989. The two hour show featured 17 of Swifty’s finest songs, with the singer joined on stage by 12 male dancers, four female backing singers and a five-piece band.

During the set Swift told the crowd she’d "remember this night for the rest of my life”. "I remember seven years ago when I played my first UK show," Swift said. "King's College [in London] had sold out and there were a few hundred people."

"I was surprised that a few hundred people would come to see me perform and now I'm looking at 65,000 people in Hyde Park.This is one of those nights where I'm aware I'm going to be taking mental snapshots so I can remember this night for the rest of my life," the singer continued.

Along with tracks from 1989, Swift also included ‘We Are Never Ever Getting Back Together’, ‘Knew You Were Trouble’ and ‘Love Story’ from her back catalogue.

The night ended with the upbeat ‘Shake It Off’, which Taylor performed while standing on a bridge which allow her to ride over the heads of her adoring fans. Next for Taylor is two performances in Dublin next week before she heads back to North America to continue her 1989 tour.