Taylor Swift Made Time To Watch Her Younger Brother Graduate From College In Indiana On Sunday (17may15) Just Hours Before She Premiered Her Bad Blood Music Video At The Billboard Music Awards In Las Vegas. 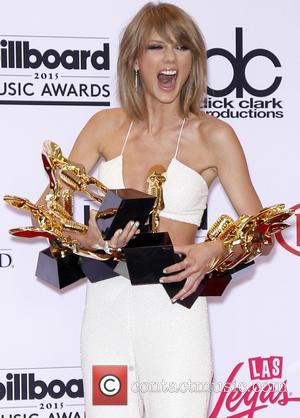 The Blank Space hitmaker's 23-year-old sibling Austin Swift received his diploma from the University of Notre Dame in South Bend, and Swift and her family were in the stadium to watch his big moment.

The pop star took to Instagram.com to post a video of her cheering him on from the stands, and added the caption, "AUSTIN JUST GRADUATED FROM NOTRE DAME WHAT A DAY."

She then headed to Sin City with Austin and her new boyfriend, DJ Calvin Harris, for the ceremony, where she scooped eight awards at the annual prizegiving and presented the much-anticipated debut of the promo for her new single, Bad Blood.

The video, which features a rap remix by Lamar, begins as Swift's real life best friend Gomez turns into an onscreen foe, as the former Disney star kicks Swift through a glass window as she freefalls through the air and falls onto a car.

To get retribution, Swift attends a futuristic all-female training facility, attended by her all-star friends. The culmination of her martial arts lessons comes to a head as Swift's gang of warriors faces off against Gomez's team, and the promo ends as the two trade blows.

Swift was onstage at the MGM Grand following the world premiere, alongside her co-stars Aldridge, Zendaya, Steinfeld, Hunt, and Pompeo, as they introduced the first performers, Van Halen.

Swift also took the chance to pay tribute to her sibling, telling the audience, "Earlier this morning I watched my brother Austin graduate from Notre Dame and then I flew here. To anyone who's graduating this year, from high school, college, grad school, this is for you. Congratulations. This is kind of a graduation for us, because it honours what we achieved, but it also reminds us that we also have so much more learning to do. We have so much more to accomplish. We have so much more to fight for."

Swift previously supported her brother at Notre Dame when she skipped the MTV European Music Awards in Scotland last year (14) in favour of watching his turn as an actor in a college play.