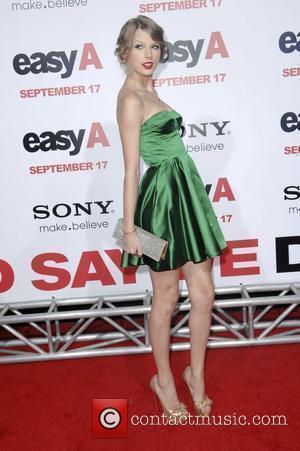 Taylor Swift has lashed out at the "mean" critics who slammed her off-key Grammy night duet with Stevie Nicks in a candid new song from her upcoming album SPEAK NOW.
The 20-year-old star was panned for her lackluster vocals at the awards show last January (10), which Swift's team blamed on technical issues.
And now the singer is speaking out about the controversy in a track called Mean from her new record.
She sings: "Drunken rumbling on about how I can't sing/But all you are is mean/And a liar/And pathetic/And alone in life/And mean."
Blasting bitter reviewers, she talks about overcoming harsh criticism, continuing: "You with your words like knives and swords and weapons that you use against me/You have knocked me off my feet again, got me feeling like nothing/You with voice like nails on a chalkboard calling me out when I'm wounded/You picking on the weaker man.
"Someday I'll be living in a big old city/And all you're ever gonna be is mean/Someday I'll be big enough so you can't hit me/And all you're ever gonna be is mean/Why you gotta be so mean?"
Explaining the inspiration behind the song to E! News, Swift says, "When you do what I do, which is you put yourself out there for a lot of people to say whatever they want... there's a million different opinions.
"I get that, no matter what, you're going to be criticised for something. But I also get that there are different kinds of ways to criticise someone. There's constructive criticism, there's professional criticism - and then there's just being mean. And there's a line that you cross when you just start to attack everything about a person."