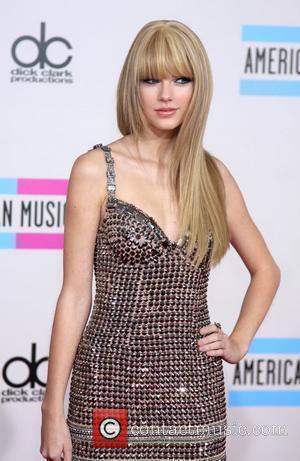 Taylor Swift was serenaded by comedian Dane Cook on U.S. TV on Monday night (22Nov10) and the country singer was stunned when the funnyman revealed a special tattoo tribute on his chest.
The Love Story hitmaker appeared on The Tonight Show with Jay Leno and during the appearance, fellow guest Cook announced he had prepared a musical number for Swift.
He declared, "I'm a huge fan of yours. America's sweetheart right here. You're tremendous and talented so I thought I would do something as a memorable moment for you tonight."
Cook then took off his shirt to reveal a fake tattoo of Swift on his chest, leaving the singer open-mouthed as he picked up his guitar and sang to her, as host Leno quipped: "This is stalker territory here."