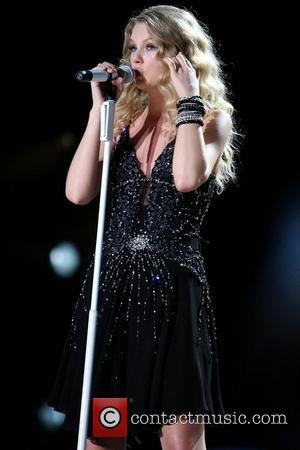 Taylor Swift was beamed aboard the Starship Enterprise as part of a skit to open the CMT Awards in Nashville, Tennessee on Tuesday night (16Jun09).
The spunky singer joked with show host Bill Engvall about following through on all her dreams - and when she told him she dreamed of being a part of the new Star Trek film he had to break it to her that the blockbuster had already been released.
An upset Swift stated, "But it's my dream!" and then found herself playing a vulcan opposite new Mr. Spock Zachary Quinto and Simon Pegg in a doctored scene from the film.
Asked if she was a member of Star Fleet, Swift quipped, "I'm a member of (website) MySpace, do you do MySpace...? Do you do Twitter? I could totally teach you how to do Twitter."
She then dreamed up a locker room encounter with Tennessee Titans quarterback Kerry Collins and an appearance in a T-Pain rap video.
The promo came to an abrupt end when Swift was bleeped and insisted she hadn't used a swear word.
Dierks Bentley kicked off the ceremony and the night's first winner was the Zac Brown Band for Breakthrough Video of The Year (Chicken Fried).