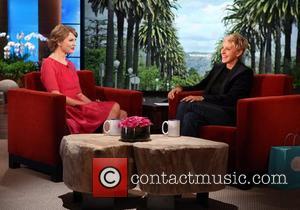 Taylor Swift and Adele dominated the 2011 American Music Awards on Sunday (20Nov11) after walking away with three trophies each.
The Love Story hitmaker ruled the country music categories, taking home the Favourite Female Artist accolade and Favourite Album for Speak Now, as well as the coveted Artist of the Year honour.
Accepting her award, a stunned Swift told the audience, "I wrote this album while I was on the Fearless tour and so I ended up writing lots of these songs at four in the morning in hotel rooms... And the fact that you would honour it in this way, you just have no idea what this means to me... I want to thank all the fans for remembering the lyrics and for caring about lyrics, I'm just so thankful and I'm so happy."
British soul singer Adele, who was not present at the ceremony as she is recovering from vocal surgery, was given a new reason to smile - she was named Favourite Adult Contemporary Artist and Favourite Pop/Rock Artist, while her record 21 was the top pop/rock album.
It proved to be a lucky night for the ladies - Nicki Minaj picked up two trophies and Rihanna, Beyonce and Jennifer Lopez each scored one.
Katy Perry also took home a special achievement prize for becoming the first woman in the history of pop music to have five number one singles from one album.
The 2011 ceremony featured the most live collaborations in the show's history as Nicki Minaj and David Guetta got the evening off to a blazing start performing their new track Turn Me On. Pitbull, Lil Jon and Marc Anthony also teamed up for Reign Over Me, while Enrique Iglesias and Ludacris took to the stage for Tonight.
Adam Levine did double duty singing Moves Like Jagger with Christina Aguilera and his band Maroon 5 before racing to join Gym Class Heroes on their tune Stereo Hearts. Jennifer Lopez also pulled out all the stops as she sang On the Floor with Pitbull and later brought down the house at Los Angeles' Nokia Theatre by debuting her new song T.H.E. (The Hardest Ever) with will.i.am.
The complete list of winners from the 39th annual American Music Awards, determined by online voting, is as follows:
Favourite Male Artist, Pop or Rock - Bruno Mars
Favourite Female Artist, Pop or Rock - Adele
Favourite Band, Duo or Group, Pop or Rock - Maroon 5
Favourite Album, Pop or Rock - Adele (21)
Favourite Male Artist, Country - Blake Shelton
Favourite Female Artist, Country - Taylor Swift
Favourite Band, Duo or Group, Country - Lady Antebellum
Favourite Album, Country -Taylor Swift (Speak Now)
Favourite Artist, Rap/Hip-Hop - Nicki Minaj
Favourite Album, Rap/Hip-Hop - Nicki Minaj (Pink Friday)
Favourite Male Artist, Soul/R&B - Usher
Favourite Female Artist, Soul/R&B - Beyonce
Favourite Album, Soul/R&B - Rihanna (Loud)
Favourite Artist, Alternative Rock - Foo Fighters
Favourite Artist, Adult Contemporary - Adele
Favourite Artist, Latin - Jennifer Lopez
Favourite Artist, Contemporary Inspirational - Casting Crowns
Artist of the Year - Taylor Swift
New Artist Of The Year - Hot Chelle Rae.