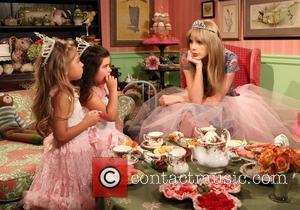 Taylor Swift, Rihanna, Ashley Judd and Hayden Panettiere are among the stars championing an internet campaign to bring the leader of a terrorist group in Uganda to justice.
A documentary called Kony 2012, about the ongoing conflict in the African country, has become a viral hit on the web this week (beg05Mar12) after being viewed nearly four million times in just two days.
The film by humanitarian group Invisible Children is named after Joseph Kony, the leader of the Lord's Resistance Army (Lra), which has allegedly recruited thousands of child soldiers to fight in battles.
The organisation aims to make him famous,"not to celebrate him, but to raise support for his arrest and set a precedent for international justice", and a number of high-profile stars have backed the issue on Twitter.com.
Swift has been urging her followers to watch the film, along with Chris Brown, Martina MCBride, Kristen Bell, Ashley Judd, Hayden Panettiere, Christina Milian, Eliza Dushku and MC Hammer, among others.
In a post on the social networking website, Rihanna writes, "Please go to Invisiblechildren.com. Even if it's 10 minutes... Trust me, you Need to know about this!" while La Toya Jackson tells fans, "Please!... We must spread the news and Stop Kony by making Kony2012 famous. Let's put an end to this!"
Actress Chloe Moretz was delighted to see how far the campaign has spread, adding, "So exciting how much improvement we've made for Kony 2012. This morning hardly anyone knew tonight? Everyones (sic) knows."