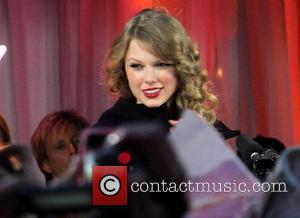 Porn king STEVE HIRSCH is to spoof Taylor Swift and Kanye West's one-time feud in a new X-rated movie.
The pair hit the headlines after West stormed the stage at the 2009 MTV Video Music Awards to protest Swift's win, declaring her Best Female Video prize belonged to his friend Beyonce.
Now adult movie masterminds at Hirsch's Vivid Entertainment want the pair to kiss and make up in the bedroom as they parody their relationship in a naughty new DVD.
Production on the racy film will begin in "the next two months".
He tells website Celebuzz.com, "We're always analysing news stories for their movie potential. The Kanye/Taylor feud has high visibility, is filled with passion and is something we believe that fans of adult films would enjoy.
"We're reviewing script concepts and definitely want to include that famous moment at the Video Music Awards."