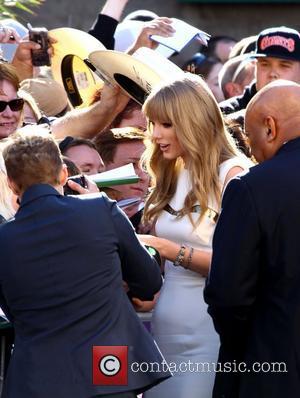 If it feels like there are dozens of award ceremonies for country music, then the best rule of thumb for an artist's success within the genre is to probably take the Academy of Country Music Awards as among the most authentic. Taylor Swift certainly will, but then that's probably because she's so good at winning them. The 22 year-old picked up the coveted Entertainer of the Year at the 2012 ceremony held this weekend in Las Vegas, meaning that it's the second time in a row that she's scooped the gong.

CNN reports that Swift was the only female candidate in the category, but beat out male performers Kenny Chesney, Jason Aldean, Brad Paisley and Blake Shelton to take the honor. She told the crowd "I want to say to my fellow nominees in this category, I respect you so much and I love you. To the fans for voting, thank you for doing this. This is exciting. Thank you!"

Lovely. Other winners on the night included Miranda Lambert who took home the Album of the Year award for her LP 'Four The Record.' "I own every record in this category and I've been listening and listening, thinking - man, not going to get it. Every record is amazing and I'm so thrilled," she gushed. Lady Antebellum meanwhile scooped Vocal Group of The Year - though they were nominated in five categories - whilst 'American Idol' alumni Scotty Mccreery took home Best New Artist.