Sounding like she was named after a Midwest trucking company but looking like a Million Dollars, Taylor Swift, brings us more heart breaking tales of personal woe on her latest release 'Speak Now'. Laying bare her soul, wearing her heart firmly on her sleeve and not being afraid to expose herself, in a very autobiographical way, are a trait of the Swift song writing philosophy. 'More in touch with her inner life than most adults' she may be but youth is on her side, and it is the younger audience that she has so effectively captivated. Taylor Swift has rightly been credited with bringing Country music to a largely untapped demographic.

The Grammy Award winning, Multi-Million selling Cover Girl, Movie Star, Wal-Mart supplier (Clothing), Hockey loving, one time squeeze of Joe Jonas and former Girl Of The Year is currently the 12th Most Powerful Celeb in the U.S and what's more.............her stock is rising! A big fan of Shania Twain but not so of Kanye (How stupid do you feel now) West, Taylor has written and co-produced her third album. 'Speak Now', as in ............................'If anyone knows of any lawful impediment why this man should not be married to this woman, they must speak now or....' is a collection of 14 Swift songs (Unless you go Deluxe) that will be adored by her millions of fans as well as surprising a few new one as well. 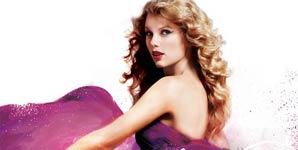 The pride swallowing flight risk with a fear of falling and a love of sparks and fireworks has not ventured far from the path so far trodden, and why would she...'If it ain't broken'. The song writing occasionally veers towards the twee....'Time turns flames to embers, but you'll have new Septembers'... but generally it is intuitive, honest, personal and at times biting and witty.........seriously. When Swift takes on the role of nuptial interrupter in the title track 'Speak Now' she certainly doesn't hold back as she tries to stop (Why?) an Alice Cooper like Edward Scissor Hands groom from marrying his bride 'Dressed in a gown shaped like a pastry' and 'Her snotty little family all dressed in pastel'. If you even liked 'Love Story' then you're destined to adore this. Similarly 'Better Than Revenge' doesn't lose time beating around the bush (Sorry) ................'She's an actress, she's better known for the things she does on the mattress.' Here Taylor goes a little Avril Lavigne and 'rocks out' as she bites back..'No amount of vintage dresses gives you dignity........she took him faster than you could say sabotage.' Can someone give this girl a cuddle?

Benefiting from hindsight (Hers not mine), 'Dear John' also shows just how frank she can be. Her tale of troubled love is full of bitterness, regret, betrayal, psychological abuse and resentment.......the 'Girl in the dress who cried all the way home..............sees it all now that you're gone.' If it is taken as read that all her tunes are written from her own personal experiences then Taylor Swift, who is only just approaching her 21st birthday, has certainly had her share of bad relationships and emotional turmoil.

Miss Swift's new album has all the big budget hallmarks of slick production. The string arrangements compliment many of the tracks and add a certain degree of sophistication, in a Reese Witherspoon 'Sweet Home Alabama' kinda way. She's not afraid to strip it back either though. On 'Never Grow Up' and 'Mean' we get acoustic guitars and banjos that play to the Country stereotyping very well. Elsewhere, on tracks such as 'Haunted', Taylor shows her versatility as a songwriter. Here we get a more dramatic, theatrical and orchestrated take on another tale of unrequited love.

'Speak Now' will no doubt break even more records, and garner even more awards for Taylor Swift. She has a fine velvety, expressive voice which she uses to great effect. Giving a passionate performance of her well written and equally well produced tunes further emphasises her talent as both a writer and performer. Her songs may touch on themes that don't necessarily sit with the tone or tempo of the track but they clearly work in engaging her audience with their ultimate honesty. Woe betide you if you ever cross Taylor Swift, you'll live to regret it and it'll be immortalised in song forever! Love her or loath her she surely only set to get bigger.