Review of 1989 Album by Taylor Swift

Taylor Swift is only 24-years-old and five albums deep into her career, but with every record she releases, she continues to take her sound to new heights and change the game as we know it. On '1989', Swift's newest venture, she trades her country twang for the big city lights. It's a record hit deep into left-field, but she knocks out of the park with ease. 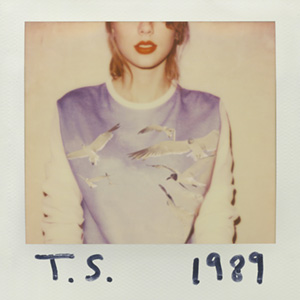 '1989' is Swift's first self-proclaimed 'pop' album, and hopefully it isn't her last one. Granted, she's been no stranger to the sound; it's been there since the very beginning in even her earliest country days on tracks like 'Teardrops on My Guitar' and 'Our Song'; however, it wasn't until her 2012 effort, 'Red', where she may have fallen in love with the idea of going one hundred percent pop after citing Max Martin-assisted track 'I Knew You Were Trouble' as her favourite.

The songwriting on '1989' is vastly improved in all aspects. The lyrics aren't as story-driven with as deep of a narrative as Swift can craft at times, but there's a couple of great one liners that make up for it. Where it really shines is her unapologetic collaborations with co-writers. Her previous partners in crime, Martin and producer Shellback, have returned with a total of seven songs written for the album, highlighted by the monster lead single, 'Shake It Off'. Naturally, the songs that stand out the most on '1989' are the ones written with the duo: 'How You Get The Girl' is the gold standard for straight up pop songs with one of the catchiest choruses of the year, while 'Style' and the Lorde-esque 'Blank Space' offer their own pop charm and have definitely earned a place in Swift's best songs to date.

It isn't just the Max Martin show though, as fun. guitarist and mastermind of Bleachers Jack Antonoff adds his touch to 'Out of the Woods' and 'I Wish You Would' - it gives a bit of diversity that keeps '1989' from being a full-on bubblegum fest. It also really showcases Antonoff's vision as a writer, as his Bleachers sound rubs off very obviously, but pleasantly, on 'Woods.' OneRepublic frontman Ryan Tedder also pens some melodies too, most notably in the record's 80s style synth-filled opener, 'Welcome to New York'. It's the track that prepares you for the ride of '1989', but the record's non-stop hooks and Swift's best vocal performances yet will make you want to jump from your seat.

It takes a certain level of confidence to completely alienate your roots and go forth with what you really want to do as an artist, but Swift has shown on '1989' that it's as genuine a move as you'll ever hear. Every track boasts a huge pop sensibility with massive production, and it's enough proof that '1989''s direction was the best choice she could have made. When we look back on '1989' in the future, it won't be as Taylor Swift's pop star experiment - it'll be as the record that kick-started her career into something bigger than anyone thought could be possible.