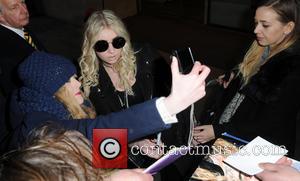 Actress-turned-heavy rocker Taylor Momsen has no regrets about asking a choir of eight-to-12 year olds to sing about going to hell on a new album track, because she's convinced the kids had no idea what the lyrics meant.

The angelic voices feature on The Pretty Reckless' new song Heaven Knows and Momsen is defending her decision to ask children to croon such a dark message, insisting she asked them to use the recording session to release angry thoughts.

The former Gossip Girl star tells Revolver magazine, "I was like, 'Throw your f**king hands in the air!' and it was really hard not to curse. (I said), 'Scream about what makes you hate and what makes you the angriest in the world. I want you to scream as loud as you can.' By the end of it, they were going crazy.

"I don't think they understood what they were singing. Or they did and were totally cool kids."