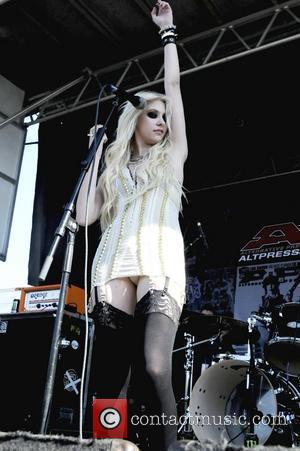 Taylor Momsen has been slammed by anti-smoking campaigners for lighting up illegally onstage on Sunday (27Jun10) - officials have branded it "a dumb thing to do".
The Gossip Girl star was performing with her band The Pretty Reckless in California when she took time out from their set to smoke.
The 16 year old is two years below the legal age to buy and smoke cigarettes in the state of California - and her onstage antics have sparked outrage.
Momsen has been blasted by officials at Britain's Action on Smoking and Health (Ash) organisation for succumbing to the "filthy, deadly addiction" - and for setting a bad example to her young fans.
A spokesperson for ASH tells WENN, "Clearly Momsen's act is designed to shock and smoking illegally on stage is part of that act.
"It is to be hoped that her fans have the maturity to see that her smoking is neither cool nor glamorous but a filthy, deadly addiction and a dumb thing to do."