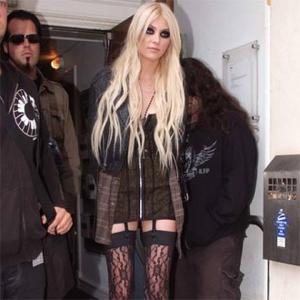 Taylor Momsen is obsessed with fire.

The singer-and-actress stuns her bandmates in The Pretty Reckless with her desire to incinerate random objects, though they think she occasionally goes too far.

Guitarist Ben Phillips revealed: "Taylor loves setting things on fire, so this is great. Taylor thinks we're some rock 'n' roll bada*ses. In the studio, there was this pit where the owner would burn stuff. We'd burn old keyboards, computers, stuff them full of TNT and set them on fire. Taylor loves fire.

"I shouldn't say this. One morning, Taylor got into the studio really early - she'd just had her dog neutered and brought in the bits. Which she then burned. We were grossed out."

Despite her unusual habit, the 17-year-old star insists she is not a bad person or as difficult as she has been perceived, arguing she is just a typical teenager.

She told heat magazine: "I do smile when things are funny. I'm quite moody, I'm a teenager and I'm PMS-ing all the f***ing time, what do you expect? I am quite moody and I have an interesting life and I get my picture taken 24/7, and it's not always pleasurable. I am really moody, but I'm not a mean person. I'm actually nice."

The 'Gossip Girl' actress also defended her reputation for wearing "provocative" clothing, insisting she is being "rock 'n' roll".