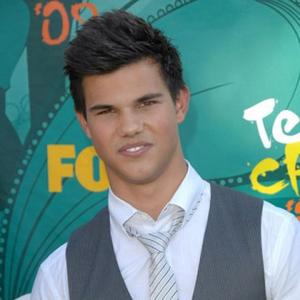 Compiled by Vanity Fair magazine, the rankings revealed the 18-year-old actor raked in an estimated $33.5 million for his various movie appearances throughout 2010, making him the ninth-highest earner in Hollywood.

As well as pushing last year's number nine Robert Downey Jr. into tenth place, Taylor beat both Kristen and Robert - who received $28.5 million and $27.5 million for their respective film roles over the past 12 months - who landed in 13th and 14th places.

"Then, with the immense success of the film, the agents went back and renegotiated The Deal - Lautner's deal in particular was really bumped up."

With 'Avatar' director and producer James Cameron securing the top spot in the rankings with an estimated yearly earning of $257 million, Johnny Depp - who raked in $100 million in 2010 - was listed as the highest-earning actor, taking home $40 million for his role as the Mad Hatter in 'Alice in Wonderland' alone.

However, despite being pipped to the post by her 'Twilight' co-star, Kristen Stewart's estimated $28.5 million earnings made her the highest-ranking female star in 2010.