Lady GaGa Hit The Slopes Over The Weekend (14-15mar15) To Cheer On Her Fiance Taylor Kinney As He Took Part In A Skiing Challenge For Charity. 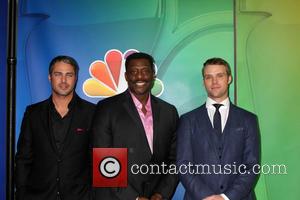 The couple, which became engaged last month (Feb15), headed to Park City, Utah so the Chicago Fire actor could compete in the 2015 Celebrity Ski & Smile Challenge to raise funds for Operation Smile, which helps children with cleft lips and palates.

Lady GaGa donned skis to join Kinney and the contestants at a photocall and later supported them at a VIP dinner that evening.

The Vampire Diaries actor Michael Trevino shared a picture of himself posing with the pair on Instagram.com, adding, "Been a while since I've seen these two. Out here on the slopes with my brother Taylor Kinney and the one they call Gaga."