Actress Taryn Manning's Mum Is Worried Every Time Her Daughter Takes On A Dark Role - Because The Orange Is The New Black Star "Goes There" And Really Gets Deep Into Her Characters. 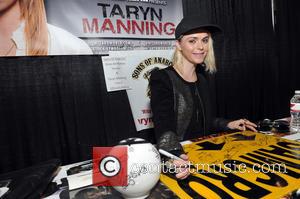 Manning admits her mother was far from impressed when she called to tell her she had landed the role of real-life kidnap and rape victim Michelle Knight in new TV movie Cleveland Abduction.

Knight, now 34, was the eldest of the three women who were held captive by Ariel Castro for nearly a decade before they were rescued in 2013.

Manning reveals her mum was "horrified" when she first heard the casting news.

The actress tells People.com, "She's like, 'Taryn, you don't need to be playing these types of roles'.

"My mom followed this story very closely, and she couldn't wrap her head around me playing a role that had such negativity. She gets concerned. My mom knows I go there."

And Manning is glad she took on the role in the film, which debuts in America on Saturday (02May15), adding, "It's triumphant. It's everything humans need to understand that they possess inside of them.

"Michelle and I have become friends. She's bold and she's brave and she has no filter... She's an awesome person, probably one of the most positive people that I've met."