R&b Singer Tamar Braxton Has Withdrawn From U.s. Tv Show Dancing With The Stars As She Has Been Hospitalised Again To Treat Blood Clots. 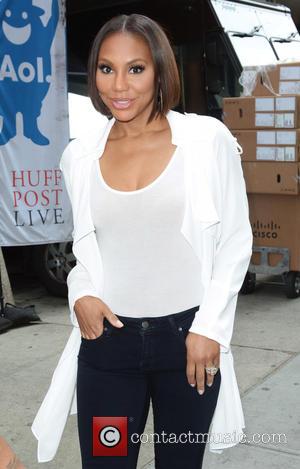 The younger sister of Toni Braxton became unwell during rehearsals for the dancing series on Monday (09Nov15) and she was initially taken to hospital with pneumonia.

She did not make it back to the studio for her televised performance with professional dancer Val Chmerkovskiy on Monday night, but she arrived in time to perform her second routine with Backstreet Boys star Nick Carter and his partner, which was enough to save her from elimination.

However, on Tuesday night (10Nov15) she shared a picture on Instagram.com of herself wearing pyjamas and clutching a teddy bear in a hospital bed. Tubes can be seen coming out of her hand, and dancer Val is sat beside her sporting a sad face.

She announced she has quit the series and scrapped her tour dates with singer Kem to focus on her health after discovering she is actually battling pulmonary embolisms, rather than pneumonia.

"With a heavy heart I regret to inform you that my season of #dwts has to come to an end along with the rest of my tour dates with @musicbykem", she writes. "After yesterday's final #dwts performance I went back to the hospital (after the doctors didn't want me to leave in the first place) only to find out that I don't have pneumonia but something way more serious and that is having several P.E.'s (blood clots in both sides of my lungs).

"As you all know I will be the first to always encourage anyone to push through any obstacle that comes along one's way. But in this case, my health is my current obstacle... I woke up to a mirror and saw myself this morning and that makes me the winner because that almost wasn't the case. Take care of yourselves... I love you and thank you ALL for your support.

"Big hugs and kisses to my boo @iamvalc for being beyond a friend, brother and the BEST partner EVER."

Tamar Braxton has been given a 'second chance'

Tamar Braxton thanks boyfriend for saving her life

Tamar Braxton - If I Don't Have You (Audio) Video

Tamar Braxton Breaks Down Over Struggle With Vitiligo