Review of Everything Touching Album by Tall Ships

Brighton-based outfit Tall Ships release their autumn debut 'Everything Touching' after busy summer of festival action. The trio have released a couple of EPs over the past few years, creating some interest in their eloquent melodies and elongated vocals. They've been branded as a 'math-rock' act but only scattered elements of that actually have the description to fit that label. It wouldn't be fair to designate one dominant genre to Tall Ships. 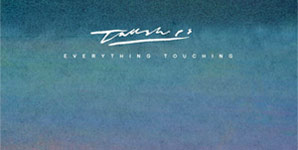 The album title may seem a bit dramatic and touchy-feely, but it's quite clever. The majority of the ten tracks are instrumentally intense with sounds overlapping and complimenting each other. There is always a noise clasping hold of or chasing the next. Having a nautical name, Tall Ships obviously like to put some science into their music. With songs called 'Phosphorescence' and 'Murmutations', 'Everything Touching' is just one big experiment. (FYI, the first is the science behind 'glow in the dark' objects and the latter is the name given to starlings flying in massive groups.) Ten minute slog 'Murmutations' ends with a euphoric choir-like revelation before skipping to the unusual sound of a child speaking gibberish.

Tracks 'T=0' and 'Best Ever' open the album in a brilliant way. Jittery build-ups of beats and misplaced keys weave in and out of the surrounding progressive noise. Every aspect dies down to an uncomfortable silence before it re-erupts, this time with some faded 'ahhs'. 'Ode To Ancestors' also masters a good build-up.

It's no wonder that Tall Ships chose 'Gallop' as the album's lead single; it's the best song out of the ten. It brings together the band's destined sound. With raring drums and ringing riffs, it sounds like Battles and frontman Ric Pethean's deep vocal holds the tone like a sort of '80s inspired Frank Turner figure.

A lot of songs take a while to get off the starting blocks. It's as if the instruments wind up in a collective daydream before realising that they've got a song to be getting on with. While 'Books' takes 90 seconds to get from A to B, it does a wonderful job when it finally gets to the crux. 'Time is precious, time will forget us' are the poignant words that float gracefully across the breezy backing, with a strong bass to inject some strength. But 'Send News' never perks up and we're left with a moping arrangement. Thankfully, it takes up less than a minute of the album.

An intriguing debut from Tall Ships, but there's just a spark missing. They should cut down on the instrumentals and replace with some words because, when they're used, the science and instrumental beauty are amplified perfectly.