By Andrew Lockwood in Music Reviews on 19 November 2012

Other Worlds is the third album from Taken By Trees. The band, once considered a side project, is now the main focus of helms woman Victoria Bergsman. Since successfully extracting herself from The Concretes, some six years ago now, where she was lead singer, Victoria has taken her own creation onto ever bigger and better things.

Other Worlds is a very assured record that exhibits the confidence of knowing that the individuality and character displayed within the twelve track set are worthy of that second glance, that ability to turn heads through non-conformity, that self-assured arrogance and swagger of youthful naivety, that couldn't give a [email protected]#k belief that it doesn't matter what you think 'cos I think I sound great. This is pop done with an air of casual cool and unassuming panache.

Through the generally up-beat mix of summer slanted tunes, Taken By Trees transport us in a state of self-medicated happiness into a world of floating weightlessness. Opener 'Horizon' gets the trippy semi-psychedelic sojourn off to a wonderful start. It's as if someone had dropped you through a translucent, gently swirling liquid of high viscosity. You should now be suitably relaxed before the sunshine breaks through on the vaguely Reggae related Dub delights of 'Highest High'. Here is where the embodiment of the entire album is first perfectly captured and expressed. The steel drum sensibility, deep bubbly bass lines and dub mix come together to create an irresistibly chilled out perversion of pop.

By Robyn Burrows in Music Reviews on 24 August 2009

Review of Taken By Trees album East of Eden released through Rough Trade. 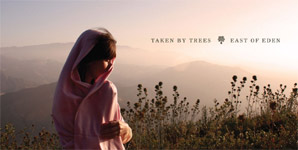 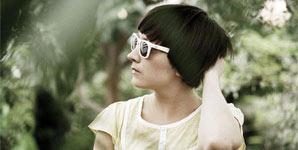 By Jamie Curtis in Music Reviews on 02 August 2007