Take That to record movie soundtrack

Take That will make their return with a song on the soundtrack for 'Kingsman: The Secret Service'. 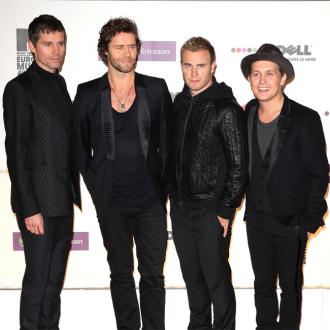 Take That will make their return on a movie soundtrack.

The 'Greatest Day' hitmakers - Gary Barlow, Mark Owen, Jason Orange and Howard Donald - are recording a song for the soundtrack of forthcoming spy story 'Kingsman: The Secret Service' and are said to be hopeful the track could finally be the one that helps them crack America.

A source told The Sun newspaper: ''Take That are a really big pull in Hollywood.

''Gary Barlow's scores are well known in the industry and producers want a top British name to feature on the movie.

''The band are also keen to get involved as it will give them decent exposure in the States, a market they've never really cracked.

''But 2014 so far has been a huge year for Take That, and featuring on a film soundtrack will make it even more exciting.''

The track marks the first new material from the band since 2010 album 'Progress', which saw them reunite with former member Robbie Williams.

The 'Angels' hitmaker will not be joining them on their new album, which is expected to be released later this year, or an accompanying tour next year.

The movie is written by Jane Goldman and directed by Matthew Vaughn, the same behind-the-scenes team that made 'Stardust', the 2007 movie which featured the group's hit 'Rule the World'.

'Kingsman: The Secret Service' will star Sir Michael Caine, Colin Firth and Samuel L. Jackson and is scheduled for release later this year.