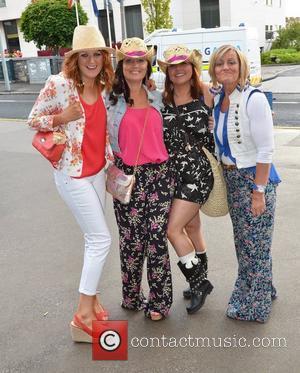 Picture: Take That fans Guests arrive at the VIP entrance for Take That at Croke Park Dublin, Ireland - 18.06.11

British pop stars Take That have bettered The Boss by shattering a concert record set by Bruce Springsteen.
The group reunited with former member Robbie Williams in 2010 and set off on a tour together this summer (11) which included eight gigs at London's Wembley Stadium.
The concerts, which ran from 30 June (11) until 9 July (11), grossed a massive $60.8 million (£38 million) with an attendance of 623,737, shattering a previous record for the highest grossing concert stand which has been held by Springsteen for the last eight years.
The Boss's 10-gig run at New Jersey's Giants Stadium in 2003 made $38.6 million (£24 million) and drew 566,560 spectators, according to Billboard.com.