Dozens Of Take That Fans Sent To Hospital After Concert 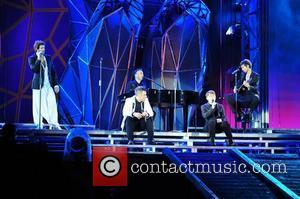 Picture: Take That performing live at Sunderland Stadium of Light on the first night of their 'Progress Live 2011' Sunderland, England - 27.05.11

Take That's successful reunion tour has been marred by a series of fan hospitalisations - 100 people had to be treated for alcohol-related injuries following a recent string of shows in their native Manchester, England.
The pop group played a number of sold out homecoming gigs earlier this month (Jun11), but some fans took their celebrations too far at the City of Manchester stadium - 65 women and 35 men were hospitalised.
The concertgoers were treated for sprained ankles, broken wrists and alcohol poisoning, according to the Daily Telegraph.
In addition, concert security staff responded to 22 reports of assault, sexual assault, public order offences and theft.
Take That performed shows in the British city between 3 and 12 June (11).