Two million albums sold. A humongous UK tour, including eight nights apiece in Manchester and at Wembley stadium, which shifted a record 1.1 million tickets in a day (breaking a record they previously set). Response to Take That's full reformation has been nothing short of stunning, but with these figures comes a huge expectation for the band to live up to the hype. 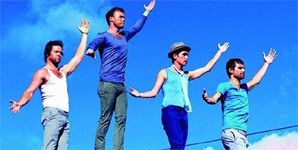 Before the quintet are a duet who have sold over a 100 million records. The coveted support slot has been handed to the Pet Shop Boys, an act who have consistently been at the better end of electro-pop. Neil Tennant and Chris Lowe use it as a chance to showcase some of the greatest moments from throughout their career, with 'Always On My Mind' sitting comfortably alongside more recent effort 'Love Etc.' Contrasting with the typically Mancunian clouds, 'Se A Vida E' is as warming now as it was 15 years ago, while 'Go West' is a predictable sing-a-long. The addition of dancers means the stage isn't sparsely populated, and also means the closing 'West End Girls' is an energetic finale.

In order to incorporate the various phases of tonight's protagonists the show has been split into three sections. Gary Barlow, Mark Owen, Jason Orange and Howard Donald come out to deafening screams and blast through a handful of recent successes such as 'Rule The World' and 'Patience'. Taking time out to thank the crowd, they then deliver an elaborate 'Shine', assisted by an impressive ensemble of Alice In Wonderland characters. Retreating backstage, anticipation grows feverishly for the solo spot of Robbie Williams. A high octane 'Let Me Entertain You' launches the one with the ego, yet he shows a lesser known humble side when addressing the crowd between songs, before his cheekiness reappears in quick rap that gets laughs about Ryan Giggs, Manchester girls and super-injunctions (unrelated, if any solicitors are reading). 'Rock DJ', complimented by a mini-army of lovely ladies, gets people dancing once again, but it is of course 'Angels' which provokes a reaction deserving of such a ubiquitous song.

And so to the moment that everyone has waited for, the five members of Take That back on stage together. It is a suitably elaborate reintroduction after being treated to some impressive aerobics on wires, with the band at the peak of the huge stage as they begin 'The Flood'. Attention is remarkably drawn away from them though, as the acrobats then begin to scale and flip along a wall of water, a stunning sight that would be the highlight of most concerts, but not for Take That who are genuine rivals to Muse's imagination for putting on a show. At various points there are monks, a ballerina whose skirt accidently comes off and then Omm, a 30 foot robot that moves from crouching to laying down to standing and various points in between to give various platforms for the vocalists. Latest tracks such as 'SOS' and 'Kidz' go down a storm, but then the five-piece re-group for a selection of older hits. Technical problems mean Barlow passes piano duties to the accompanying musicians for 'A Million Love Songs', which is stripped down and allows the vocals to shine, while 'Back For Good' remains a timeless ballad. A scripted sequence demonstrates how the band are able to poke fun at themselves, Barlow toasting the reunion but only giving Owen and Williams glasses of milk due their previous stings in rehab, before the energy is reignited by 'Pray'.

Commendably they all attempt the old dance routine with smiles evident, but it is only Donald and Howard who can claim to have so far eluded the trappings of older age. 'Never Forget' provides a fitting conclusion to the main set, while Williams' 'No Regrets' slotted in with 'Eight Letters' in the encore proves poignant for those aware of Take That's history. On tonight's evidence The Progress Tour draws a line under everything that has happened thus far, leaving 55000 punters dazzled and joyful, and regardless of the future of the man band this show can only be regarded in the most positive of opinions.