Rapper T.I. Has Apologised Again For Ill-advised Remarks He Made About The Possibility Of Hillary Clinton Becoming America's First Female President In An Online Video. 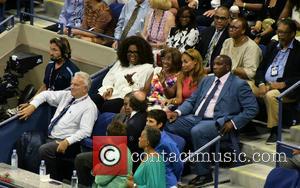 The outspoken hip-hop star hit the headlines earlier this week (beg12Oct15) when he said he would never vote for a female president because women are prone to making "rash decisions".

His comments led to an outcry on social media, which prompted T.I. to apologise on Tuesday (13Oct15). He tweeted, "My comments about women running for president were unequivocally insensitive and wrong. I sincerely apologize to everyone I offended."

Not convinced that was enough, the rap star posted a video, in which he apologised to the women in his life, on Facebook on Thursday (15Oct15).

The humbled hitmaker said, "I said some things that were insensitive and hurtful to women, so I apologise."

Attempting to explain his remarks, the rapper insisted he was just enjoying a little "barber shop" banter on DJ Whoo Kid's radio show, where he has touched on "borderline inappropriate" and controversial topics in the past.

"This time I reached for a joke that was in very poor taste using a stereotype associated to women that I should not have done... My intention was only to be humourous, not to disrespect in any way."

And, addressing comments an annoyed Oprah Winfrey made about his radio remarks suggesting a woman wasn't fit to lead America, T.i., real name Clifford Harris, concluded his message by stating, "Oprah, you've been to my house before; you know me better than that!"