A Judge Has Dragged Rapper T.I. Into Robin Thicke And Pharrell Williams' Blurred Lines Copyright Infringement Drama, Insisting He Is Liable Because He Contributed A Verse For The 2013 Hit. 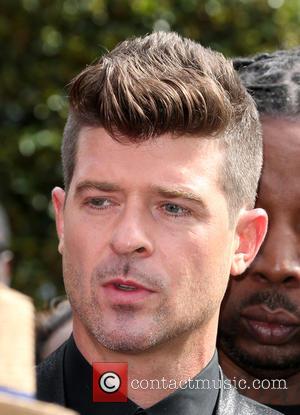 In March (15) a California jury ruled that the Grammy-nominated hit featured elements of Marvin Gaye's 1977 classic Got to Give It Up, and songwriters Thicke and Williams were ordered to hand over $7.3 million (£4.8 million) to the late soul man's family.

Soon after the result was announced, Gaye's relatives filed legal papers asking the Los Angeles judge to "correct" the verdict and hold additional parties accountable, including T.I., and on Tuesday (14Jul15), U.S. District Judge John Kronstadt, who is overseeing the case, ruled the rap star was also guilty of copyright infringement, and added that executives at record labels Universal Music, UMG Recordings, Interscope and Star Trak Entertainment should also be held liable for the song's distribution.

Judge Kronstadt also rejected arguments from Thicke and Williams' legal team, who contended there were errors in jury instructions, improper testimony from a musicologist, and insufficient evidence in the original trial, subsequently denying the hitmakers a bid for a new trial.

In addition, the judge denied the Gaye family's request for an injunction of the song, which would have removed the track from all distribution outlets. Instead, Kronstadt granted their request for the ongoing royalty rate of 50 per cent of songwriter and publishing revenues.

Thicke and Williams' attorneys are expected to take the dispute to an appeals court, according to The Hollywood Reporter.