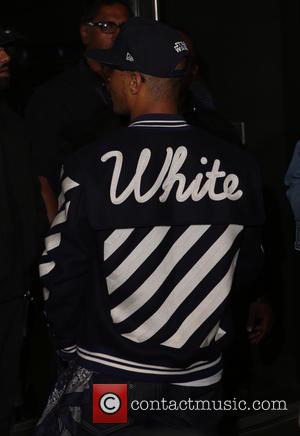 Police records suggest a dispute between a group of men broke out on the upper deck area of the hip-hop star's soul food eatery Scales 925 on Sunday night (25Oct15), and staff promptly kicked those involved out of the venue.

The fight spilled out into the parking lot, where one man reportedly pulled a gun and shot another man in the leg. The group dispersed and the victim, who has since been identified as Rice, Jr., left the scene in a friend's Porsche.

However, the car was pulled over by police, who were responding to the shooting, and the former athlete was subsequently taken into custody after he was allegedly found in possession of marijuana and $6,000 (£3,750) in cash. He was booked for reckless conduct and drug possession, reports TMZ.com.

The whole incident was captured on the restaurant's surveillance cameras and authorities are still searching for the shooter, who was reportedly unknown to Rice, Jr. They also claim to have footage showing the suspect running from the scene of the crime and allegedly dumping a gun in a stairwell before climbing into the Porsche.