Sylvester Stallone says it's been ''very, very tough'' dealing with the death of his son Sage, but he has been determined to get back to normality to ensure his heartache doesn't spiral out of control. 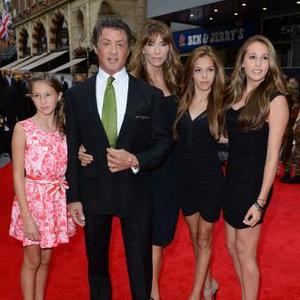 The 'Expendables 2' actor admits it's been a ''horrible'' time since the 36-year-old actor - his son from his first marriage to Sasha Czack - was found unresponsive on July 13 at his Studio City apartment in Los Angeles, but the Hollywood star is trying to get back to normality in the best possible way by returning to work.

''It's a horrible situation but, time, hopefully will heal and you try to get through it. It's something that's a reality in life.

''It's important to get back and try to start re-living your life. Otherwise you can go into a spiral.''

To help him get over his grief, Sylvester has been promoting his latest movie 'The Expendables 2' - which stars Arnold Schwarzenegger and Jean-Claude Van Damme - but he also suffered heartbreak while shooting the action blockbuster when stuntman Liu Kun died from wounds he suffered during an on-set explosion in Bulgaria.

When asked if it was tough for the cast and crew to recover following Liu's passing, he told BANG Showbiz: ''Incredibly hard, especially for the members of the stunt team, they took it very, very hard and shut down for quite a while. And it's something they're going through, it's happened in places before with films I've been on and it's never easy.''

Sylvester's latest movie also sees him star alongside Bruce Willis, Chuck Norris, Jason Statham, Jet Li and Dolph Lundgren, but the 'Rocky' actor insists there were no problems with big egos on the set because everyone ''respects'' each other.

Speaking at a press conference in London on Monday (13.08.12), he added: ''I'd like to say there was because it would make much more of an interesting story but not really, I think everyone just knew what to do - their job. The key with men like us is very simple; if you give out respect you'll get respect and if you disrespect, you get that too. It's very, very simple.''