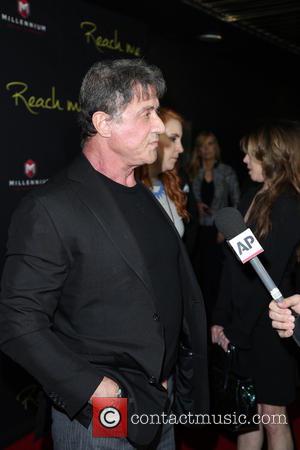 Picture: Sylvester Stallone - Photographs of a variety of stars as they arrived at the premiere for 'Reach Me' which was held at the Chinese Theatre...

Sylvester Stallone helped a fan propose to his girlfriend during an event in England on Sunday (25Jan15).

The Rocky actor was holding his An Evening with Sylvester Stallone event in the city of Sheffield when a female fan revealed her boyfriend had vowed to ask for her hand in marriage if the Hollywood veteran would take care of the proposal.

Stallone agreed and the couple joined him onstage, where he helped the nervous boyfriend pop the question.

DJ Mike Read, who was hosting the event, tells Britain's Daily Star newspaper, "A girl shouted that her boyfriend would only marry her if Stallone proposed. So I got them on stage for Sly to be the vicar. He was great, did the whole number, they both agreed and the deal was done."